We often see ourselves as paradigm shifters, an interview with Scott Parkin of Rising Tide North America

Mountaintop removal mining, Coal export, Natural Gas Fracking, Tar sands and the KeystoneXL pipeline are just a few examples of the fossil fuel threats to our climate and to local communities who are situated close to coalmines or fracking sites. Rising Tide North America is a grassroots network of groups and individuals in North America organizing action against the root causes of climate change. They stand at the frontline with local communities to address those who are most responsible for the climate crisis. One of RT founding principles is the belief that solutions to climate-injustice must be community based and should not rely on capitalist or corporate government efforts. The heart of Rising Tide is made up of over 50 local groups and local contacts throughout North America. These groups support frontline communities with direct action as the antidote to despair and aim to change the conversation and behavior.

Rising Tide calls out to ‘Rise up and defend your home’.

Sanderz: Rising Tide, and subsequently Rising Tide North America, was formed after the COP6 in The Hague in 2000. What was the original idea behind launching Rising Tide?

Scott: At that time the climate movement was made up by a lot of policy makers in places like Washington DC. Climate action had a bit of a student base and what Rising Tide wanted to do was to push it into a radical activist space where people would be taking action and not just be debating policy at the COP, think-tanks or the offices in Washington DC.

Sanderz: What does Rising Tide North America stand for?

Scott: Rising Tide NA has a large focus on standing with frontline communities, who are living next to extraction sites whether they be coalmines or tar sands, anyplace where communities are impacted by fossil fuel extraction or combustion.
Rising Tide works on those fossil fuel issues, but it has also a focus of bringing direct action into the climate movement. We had a strong push on that in the last few years, which, in our estimation, has pulled more mainstream groups like 350.org and the Sierra club into using direct action as a tactic. I would also say that Rising Tide NA has done a lot of work on challenging, what we call, false solutions to climate change, which is everything from clean coal, nuclear power to natural gas, but also market based mechanisms where day traders are trying to commodify carbon, basically to make more profit and not necessarily solve the climate problem.

Scott: I don’t think there is an effective alternative, although a carbon tax would be a useful thing. I do not no enough about the voluntary carbon market to comment.

Sanderz: In ‘Making Green A Threat Again’, published earlier this year, you gave an overview and insight into the climate movement. Direct action is a form of activism that impacts all people involved, direct and indirect. What is the psychology behind direct action?

Scott: In the political system of the US it is near impossible to affect change through elected officials, who represent the government. The philosophy, it’s more a philosophy than psychology, around direct action to us is that we are directly challenging power holders and corporations, as well as the highest levels of government to change behavior. However, ultimately, we would like to see a different system in which our energy needs are met, so we are constantly organizing non-violent mass movements lead by frontline communities to take action against these power holders. 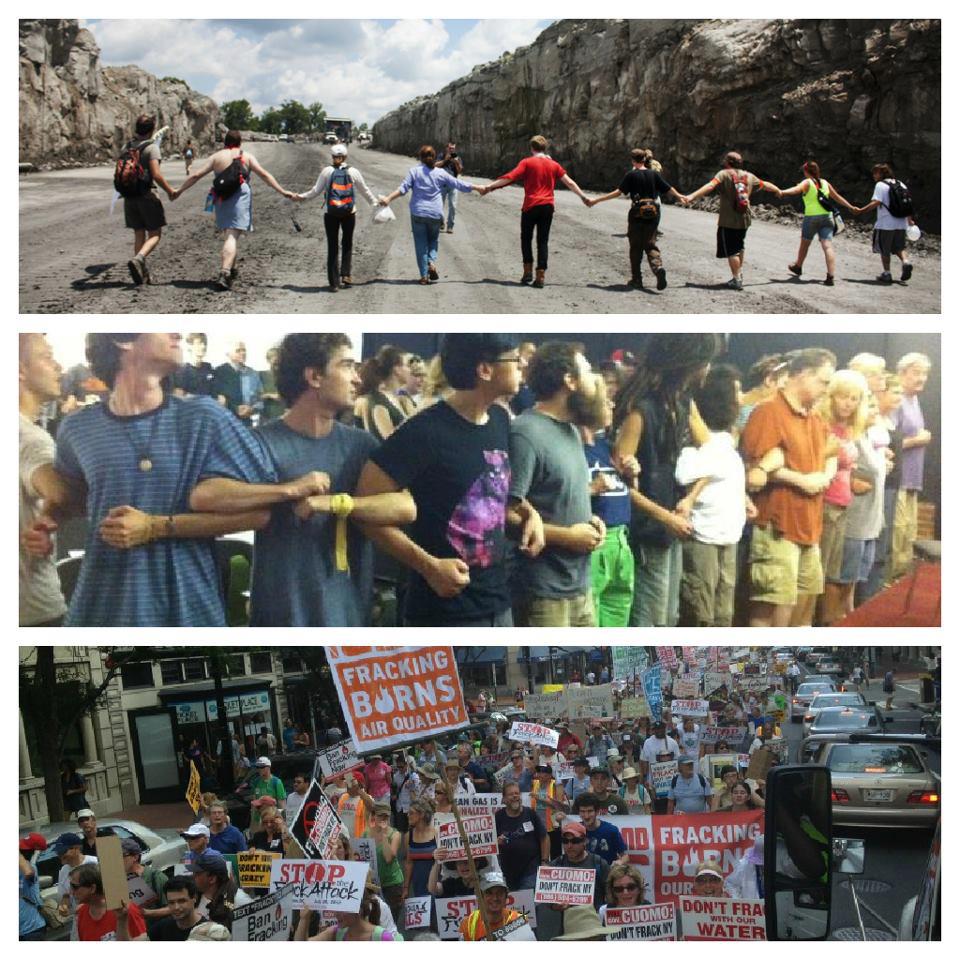 Sanderz: How do you see the future of the climate movement or what should be done to make it more effective to combat climate change?

Scott: I think what we need to do is build bigger movements. Through history mass movements have been a key piece in shifting political systems whether it is in India or Egypt. We’re devoted to build bigger mass movements so that those in power can’t stop us. We are moving in that direction and like I said before, groups like 350.org and the Sierra club are moving into a space were they use direct action and that also has a result in the growing of the mainstream. I mean, it’s not just anarchists that are participating in those actions, but also the soccer mams and school teachers, people like that.

Sanderz: In the industry’s ‘response’ to the need of carbon mitigation lies another threat to climate change: Misuse of the word sustainability, new ways of marketing: like clean coal, manipulation through sponsorship. How does Rising Tide combat practices of false information that reaches and confuses the public?

Scott: The industry is very effective in using those tactics to try and persuade the public and they have a lot of money to do it. The internet has leveled the playing field somewhat. We can get a lot of information out there through social media and emails. We also do a lot of work in communities where we can show what is really going on.

Sanderz: The 19th of October was Global Frackdown Day with confrontational anti-fracking demonstrations taking place in about 26 countries. What is the role of the media coverage in this?

Scott: The role of the media is to put the word, message out about what’s going on. If you look at campaigning and organizing as participating in information wars, the media is definitely a vehicle or tool that we use to play in that field. But I’m never satisfied in the part the media plays in this.

Sanderz: What can the outcome of such a global climate action event on the decision making be?

Scott: Groups like 350.org work on a mass globalization, but Rising Tide builds relationships with people on the frontline and we also make sure that the voices of those people are heard. There’s also a role that Rising Tide plays which is either putting direct pressure on certain fossil fuel companies or raising such an alarm about those companies so that others do. Honestly, we at Rising Tide often see ourselves as paradigm shifters and we try to change the message so that people are not just saying: ‘we need to regulate carbon’ or ‘we need to have kinder, gentler coalmining or fracking’. There’s a point where we should stop the entire process of coalmining, stop the entire process of natural gas fracturing and so on. Part of what we do is not only stay in solidarity with frontline groups, but also change the conversation.

Sanderz: The importance of the national economy is worldwide being used as a political tool to promote fracking, coal export etc. What is your comment on this?

Scott: Capitalism isn’t going away anytime soon. Part of what we’re hoping to do is shifts people’s thoughts. We’re a long way from ending capitalism, ending the fossil fuel dependent society. What we are trying to do is at least start a conversation where people realize something different needs to happen

Sanderz: In the aftermath of hurricane Sandy, Pres. Obama made statements regarding climate change which resulted in the ‘Climate Plan’ of June this year. Can you comment on Pres. Obama’s stance on climate change?

Scott: It’s one of those situations where it is obviously not enough. He talks a good game, but nothing’s really changed that much. it looks like he’s all set to approve the Keystone pipeline for instance. No one who’s a leader or a politician in this political system is going to come out right on this issue, because the fossil fuel industry owns the US Government.

Sanderz: How long can Pres. Obama stall his decision on the Keystone pipeline?

Scott: I have no idea how long he can stall it. I understand there are certain processes and rules the government and the state department have to follow to approve the pipeline, but how long they can stall it based on new information that keeps coming out I can’t tell you. They stalled it an additional two and a half weeks because of the US government shut down and before that it was because of a controversy around corruption in the state department. They continue to delay and delay. I think they are delaying because they don’t want to alienate their voting base, like environmental voters, but they don’t want to alienate the fossil fuel industry either. The Government is owned by the fossil fuel industry in this country.

Sanderz: How will the climate movement react if there will be a decision in favor of the pipeline?

Scott: I hope they will react with a lot of noise and a lot of action on the decision.

Sanderz: You and many other activists have been arrested on several occasions, and in ‘green scare lite’ you point out the additional problem of being under surveillance by the FBI. Do you ever get dispirited battling climate change?

Scott: Yeah, all the time, but I also have a lot of hope because many people get involved and take action too. I may get my parents involved on this sort of thing. I mean, I feel like we’re changing minds and shifting thoughts. I think important things are happening.

Sanderz: ‘Dirty’ banks are globally financing climate change. What would be the best strategy to undermine fossil fuel financing?

Scott: Basically the best strategy is running pressure campaigns to get them to stop funding the worst of the worst of the industry. It’s bigger than just influencing the public not to take their money to a certain bank. I actually don’t think that boycotting is very effective in the way the global economy works right now, I feel there need to be corporate pressure campaigns, like name and shame them and make the public aware of what they’re involved with. They react very strongly to that. 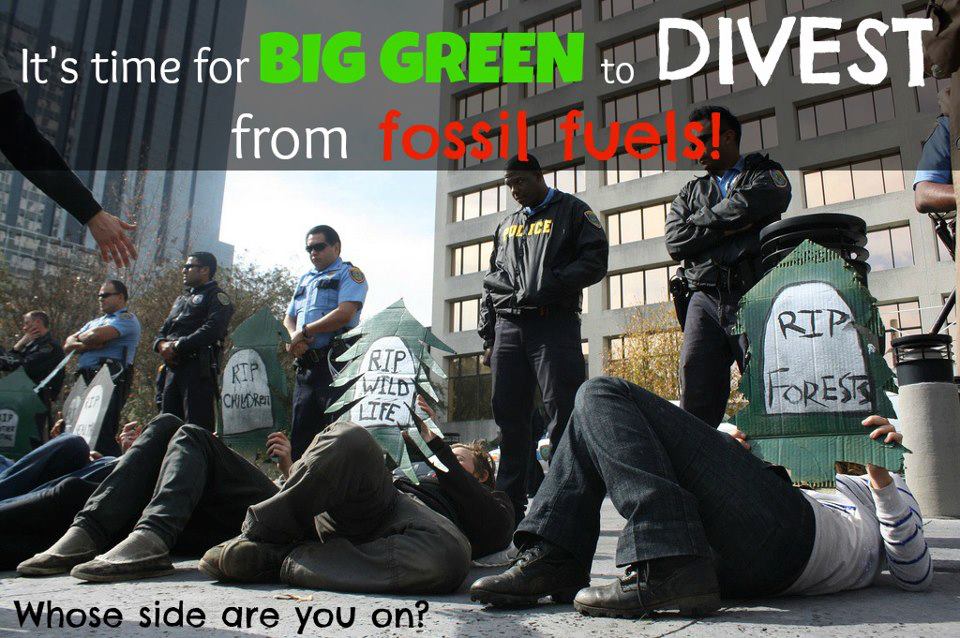 Sanderz: What do you do in your daily life to minimize your carbon foot print?

Scott: I don’t drive a car and use public transportation. I don’t eat meat. I use clean energy but I live in San Francisco, which is one of the cleaner and friendlier cities.

If you would like to know more about Rising Tide NA you can vist their website @ www.risingtidenorthamerica.org