Melting for Metal, recalling every drop of sweat at the Area 4 Festival

There will be no AREA 4 FESTVAL this year. The festival, held at the Borkenberge Airfield in Lüdinghausen Germany, is in the red. More visitors are needed to keep the festival afloat. Sadly, we say goodbye to a festival with a first-rate alternative/metal/punk/rock line-up and a truly great vibe. May it revive under protest and persistance. 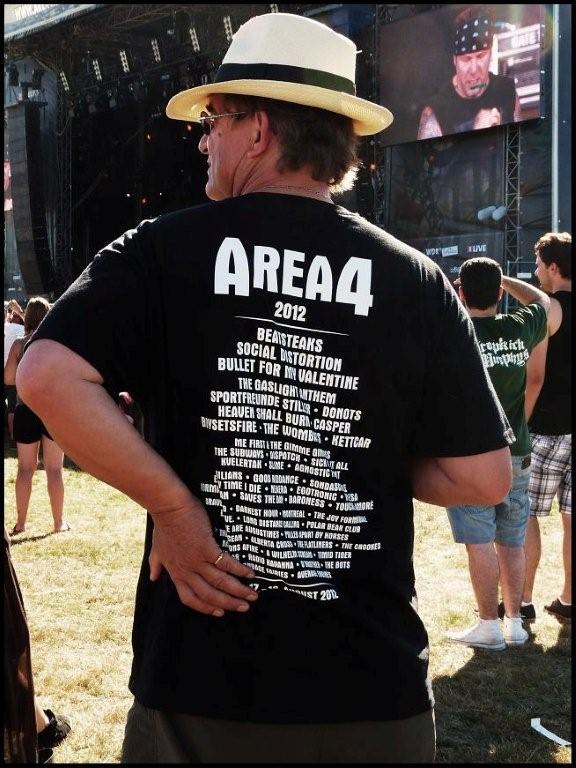 Area 4 Festival, Germany, was the hotspot of the year, not only because of their great line up (the Gaslight Anthem, the Wombats, Agnostic Front, the Joy Formidable, Pulled Apart By Horses, Social Distortion, Bullet for My Valentine and so on), but also because the Festival was held on the very few, most sizzling days of this summer. Here are some random impressions of the festival.

Day one:
Arriving just in time to pick up our passes, a FKP Scorpio’s staff member mentions to Sanderz that she recognizes him from last year. And he grew a beard! I, on the other hand look exactly the same. Should I’ve raised an eyebrow or think about a change in appearance? I ought to insert a winking emoticon right here (..) , if it didn’t mean having to cope with my ambivalence about those critters. Anyway, it’s really good to be here. 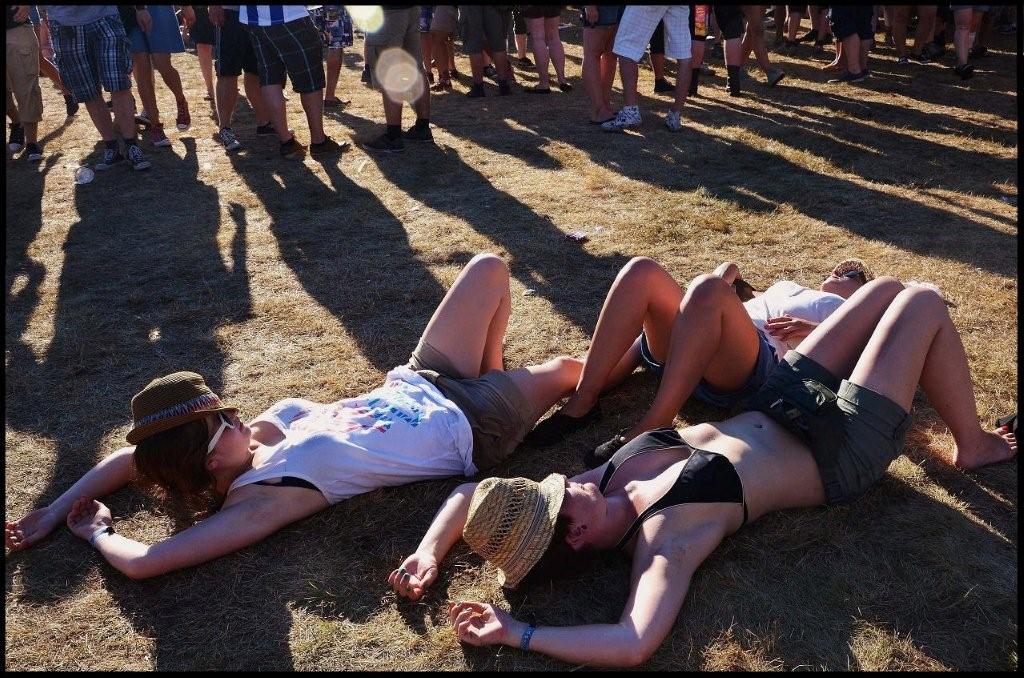 First stop and already on stage are ‘Pulled Apart By Horses’ (www.pulledapartbyhorses.com)  Their critically acclaimed sophomore album ‘Tough Love’ which was released early this year, as well as the opportunity to see ‘Britain’s best live band’ perform, has made me curious. After an outstanding performance, singer Tom Hudson infamously encore’s by emptying his stomach contents. So accordingly, I stumbled upon a remark on YouTube that says it all. And I quote: ‘The amount of vomit that features in PABH’s video/concerts is disturbing, but strangely appealing.’ You can read our conversation with PABH drummer Lee Vincent here  http://www.circlesonthewater.org/?p=2228 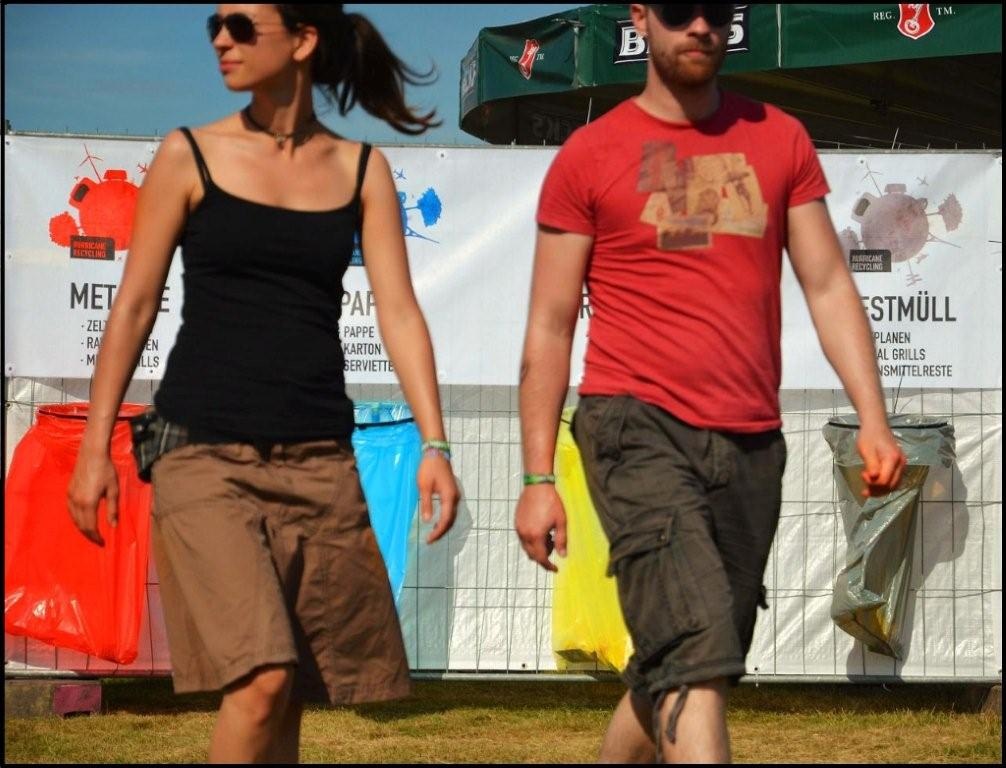 Walking the grounds of Area 4, it’s quite an accomplishment  that due to their program ‘Grün Rockt’ (Green Rocks, Area 4’s program to curb the festival’s carbon footprint)  the festival site is  remarkable clean even taken the amount of intoxication into consideration. This is a plan that works and an audience that seems to care. And of course it adds to the festival fun if you don’t have to sit or stand in someone else’s garbage. At least for me it does. GREENPEACE (www.greenpeace.org) is still  ‘Calling all Owls’ fighting to save Germany’s red beech forests, be it  from another angle this year, while painting banners with volunteers and bands to strengthen their cause. I wonder if my splash of orange contributed to some result, but I have my doubts. But even when in doubt, here’s to perseverance.

A few stands down the line PETA2 (www.peta2.com) , Peta’s youth animal right group, is represented. My eye catches their ‘Meat is Not Green’ leaflets. And for some time now, I’ve been in inner turmoil, wondering how to go about the transition of being a vegetarian to ‘the possible and the practicable’ of veganism. So I pick up a leaflet to have a tangible reminder: ‘Meat’s Not Green’.

Day two:
We’re stuck in traffic. It’s a mystery. A herd of cars have blocked all roads to the festival and we’re creeping inch by inch to our place of destination. From vibrant, happy colored outfits and lots of skin we’re concluding that this is not a punk-rock festival crowd. After a while the cars are parked at the side of the road and its passengers disappear into the wood adjacent to the motorway. We’re soon to be doubting our intelligence:  it’s 32° C/ 90° F and in half an hour we’re going to be jumping up and down on the hottest day of the year, fully dressed, while they are about to bathe in the cool, gentle waters of Germany’s Silbermeer (Silverlake).

Agnostic Front (www.agnosticfront.com) is on stage! They’re jumping up and down, all dressed in black but for bassist Mike Gallo, denying the heat for the sake of pure New York punk-rock, inspiring hardcore fans to mosh. Water is sprayed onto the public to keep them from succumbing to the high temperatures. We’re scheduled to have a talk with Roger Miret later on, but as it turns out, to find Roger is as difficult as it was finding Chuck in 2011 (Chuck Ragan).

The Wombats (www.thewombats.co.uk) are  in the middle of a signing session. Time’s up, but there is still a long queue lined up. I’m adjusting to the heat, watching this event from a distance, doing absolutely nothing. Tord Øverland-Knudsen, who has been responsible for temporarily messing up my keyboard in search of an Ø, is folding a plane from a paper, signed with names of all band-members and the girl it’s for. While she’s patiently waiting, Tord’s aiming the plane through the queue. It sails perfectly through the air and lands on the grounds of airport Borkenberge, at my feet with no-one to claim it. Not even the girl, whose name is on the paper. 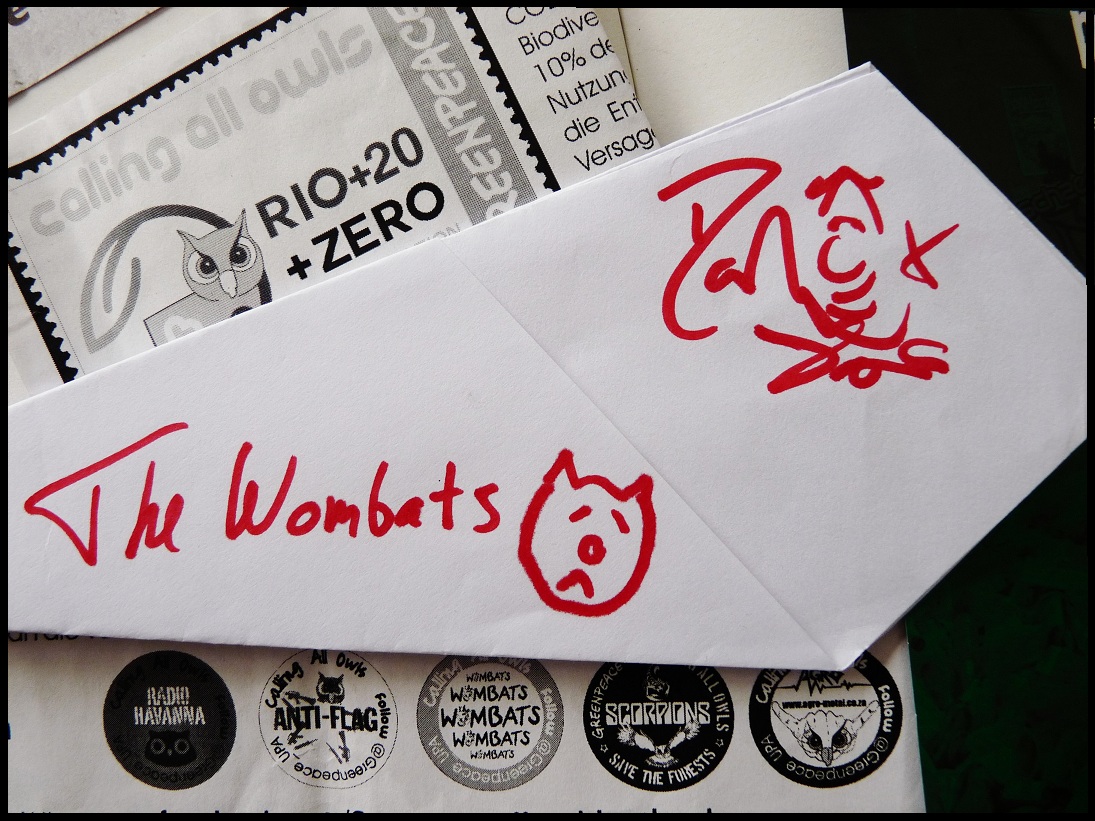 At nine o’clock when German rapper Casper (www.casperxo.com) enters the stage, we’re finally meeting up with Roger Miret (http://www.circlesonthewater.org/?p=2123) for, what turns out to be, ‘good shit’. For lack of diplomacy, that’s a compliment I appreciate. Everyone’s flushed and there are still three ours to go, before ‘Bullet For My Valentine’ (www.bulletformyvalentine.com) closes the second day of the festival to complete our stay in Germany.

Thanks to FKP Scorpio (www.fkpscorpio.com).