Besides our brief encounter with Flogging Molly, NOVEMBER was pretty much hell. It seemed that my lifelong reflections could have been reduced to the conclusion that life’s merely a random on/off switch, when my brains were starting to heat up to a healthy 40° C + at the end of October. Once your immune system’s down –and I’m very inclined to use sci-fi metaphors, but I’ll withhold myself- you’re susceptible to every passing virus. If you want you can carry the comparison from the human immune system to what we’re doing to this planet; challenging it’s abilities to recuperate. Although I’m not really concerned about its survival, the question is in its willingness to host us in the long run.  Earth will adapt, transform and float gracefully through the universe.

On a more positive note; the physical restrictions due to the fever (drink much fluid, try not to puke) and with not much more ACTIVISM to contribute than raise a burning fist, left me with little else to do than watch TV. I limited my intake by three series: The first situated in the Middle Ages, the second in the 1970s and the third in the future. I began to compare the dependency (or lack thereof) on electronic appliances. The simple truth is that we ‘survive’ on the current standard of developments. In the Middle Ages the way to reach someone could be perceived as an adventure, but meant to travel at great risk . In the 70ties the home or payphone was the way to reach somebody though being at the mercy of the receiver staying in place, while in the future the ability to contact anyone is almost without limitations which worsen our dependency on electronics.

What does it mean being always “within reach” to a society and the planet in general? What would be the biochemical effect on the human brain when a phone/pad would be taken away for some time? Does it make me happier to digitally share what I had for breakfast with my friends or followers? What was ‘lighting a cigarette after the theater in the seventies’ is ‘texting in between everything’ nowadays. Is there so much more to say in the 21st century? Maybe too much of economic successes are built on the frailty of the human ego. So what efforts have to be made to adapt to CLIMATE CHANGE without hurting the beast that’s called economy? Don’t get me wrong, I’m not fighting the pros of our time, but just trying to instigate thought through the delirium of a fever that might lead to inventive solutions for environmental change. 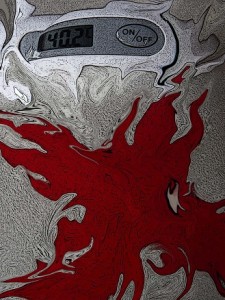